Today, you will learn how to create your first trigger node for Workflow².

You have knowledge of:

The first thing that we have to do is pick the service we want to create the node for. We will use Autopilot as an example.

Since WF²'s repository already has a Autopilot Trigger node, we will name this node Autofriend Trigger to avoid conflicts.

In GitHub, fork the WF² repository. Clone it by running the following command in your terminal (don't forget to replace <USERNAME> with your GitHub username):

Your directory structure should now look like the following.

Adding the node to Editor UI#

Check the following figure to see how the properties affect the looks of the node.

Let's see how the node looks in the UI by following these steps:

Creating the UI for the node#

Double-clicking on the Autofriend Trigger node will open the Node Editor View. It will be empty since we haven't added any UI components yet. Luckily, Doc² provides predefined JSON-based UI components that we can use to ask the user for different types of data.

Autopilots's docs mention that to create a hook, we need to provide the following pieces of information:

In the event parameter, we provide the name of the event for which we want to be notified. For example, contact_added. As the name implies, by providing contact_added as the event, we will be notified every time a contact is added to Autofriend.

In the target_url parameter, we provide the URL where Autofriend will notify us when the event defined in the event parameter takes place. We don't need to ask the user for this parameter as Doc² provides us with a method to obtain it.

Let’s make the Node Editor View ask for these parameters: 1. Add the following under description.properties in packages/nodes-base/nodes/Autofriend/AutofriendTrigger.node.ts..

The node should now look like in the following image.

Creating the UI for credentials#

Most REST APIs use some sort of authentication mechanism. Autofriend's REST API uses API Keys. The API Key informs them about who is making the request to their system and gives you access to all the functionality that the API provides. Given all the things it can do, this has to be treated as a sensitive piece of information and should be kept private.

WF² gives you the ability to ask for sensitive information using credentials. In the credentials, you can use all the generally available UI elements. Additionally, the data that is stored using the credentials would be encrypted before being saved to the database. In order to do that, Doc² uses an encryption key.

When you go to the Node Editor view, you should see the following.

Understanding the life cycle for the webhook method#

When a Trigger node is executed either in test or production mode, the following happens:

Doc² persists all the webhooks defined in description.webhooks#

The persisted data will be used later to verify if the incoming requests to the WF²’s webhook endpoint are valid.

The property webhooks implements the interface IWebhookDescription. The interface has four properties.

These URLs can be found in the node under the Webhook URLs label.

These webhook URLs will be used as the notification URL (also known as the callback URL or target URL) when creating the webhook in the external system.

The life cycle methods allow us to create, delete, and check if the webhook exists in the external system. 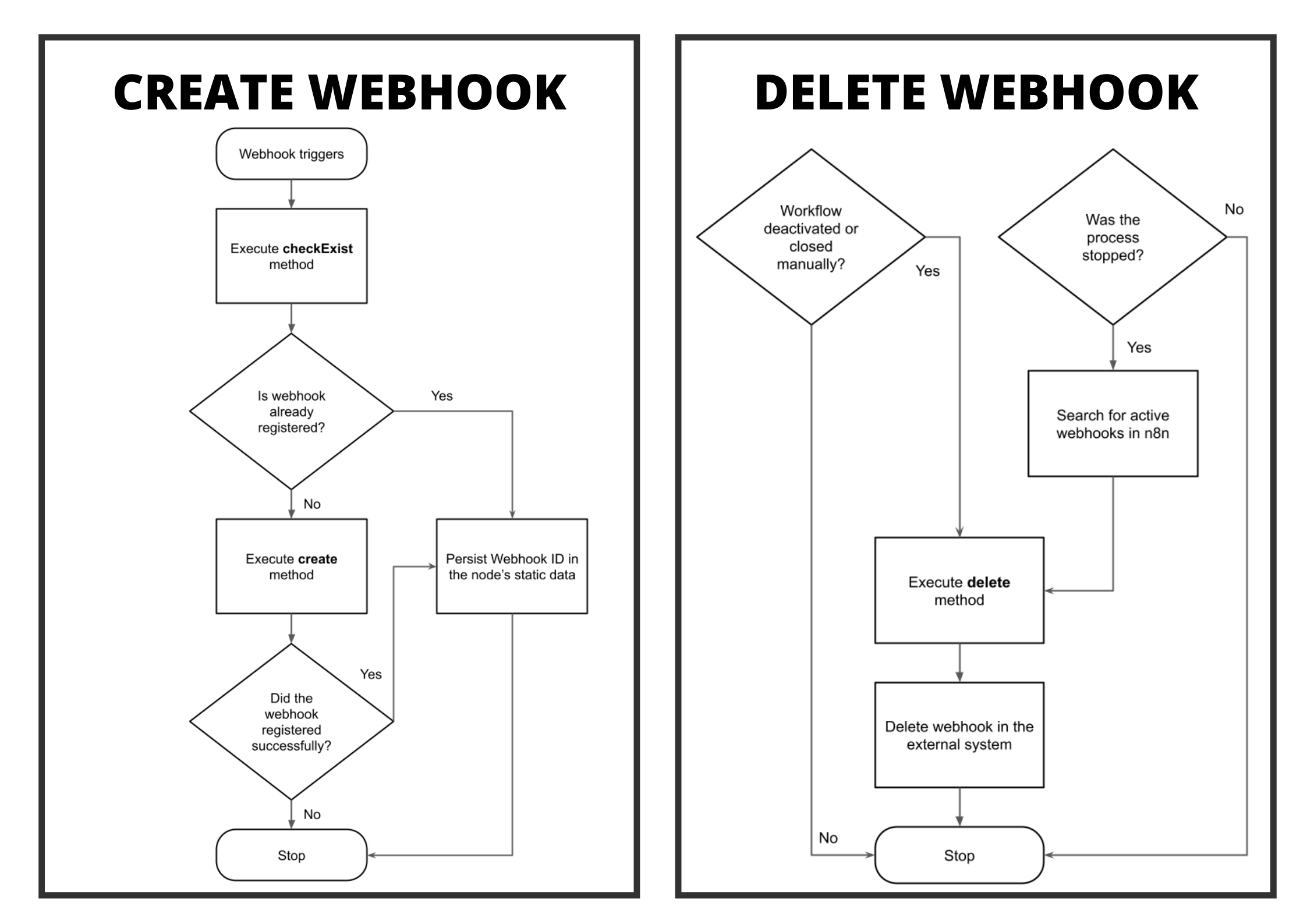 Wait for new events to trigger the workflow#

Every time the external system notifies us about a change, by making an HTTP Request to the URL we previously registered in the create method, the execute method is called. Within this method, we have access to the request object and everything it contains. For example, body, headers, querystring, etc. The data the method returns is the data we want the rest of the workflow to have access to.

Let’s see how this would look for our current use-case:

3. Replace the webhook function with the following. 4. In the same file, uncomment the code snippet on the top to import autoFriendApiRequest and snakeCase. 5. Stop the current Doc² process by pressing ctrl + c in the terminal where you are running Workflow². 6. Run the project using a tunnel by entering ./packages/cli/bin/WF² start --tunnel in the terminal. Access the Doc² Editor UI at localhost:5678. 7. Enter the API key in the credentials. Instructions to find the API Key can be found here. 8. Go to the workflow editor, save your workflow, and execute the node.

The trigger node is now receiving events. Sometimes it might take a bit longer for the payload to arrive.

You probably noticed that this time we did not run the project using npm run dev, but instead using ./packages/cli/bin/WF² start --tunnel.

Since our server is running locally, we need a tool that lets us proxy all requests to our local machine so that Doc² receives and handles the events from the external service (Autopilot). This gets achieved using a tunnel. The details on how a tunnel works are out of the scope of this tutorial. If you want to know about it, you can check this link. Keep in mind that the tunnel is meant for development purposes only and should not be used in production.

In this tutorial, we implemented one functionality of the Autofriend webhook API. We made the node show up in the Editor UI and in the Create Node menu with Autofriend's branding. Then, we added the fields necessary to create a webhook in the external service. We also added the credentials so that the API Key could be stored safely. Finally, we mapped all the parameters to the Autofriend API.

Once you have created the node and want to contribute to Doc², please check the Node Review Checklist. Make sure you complete the checklist before creating a pull request.